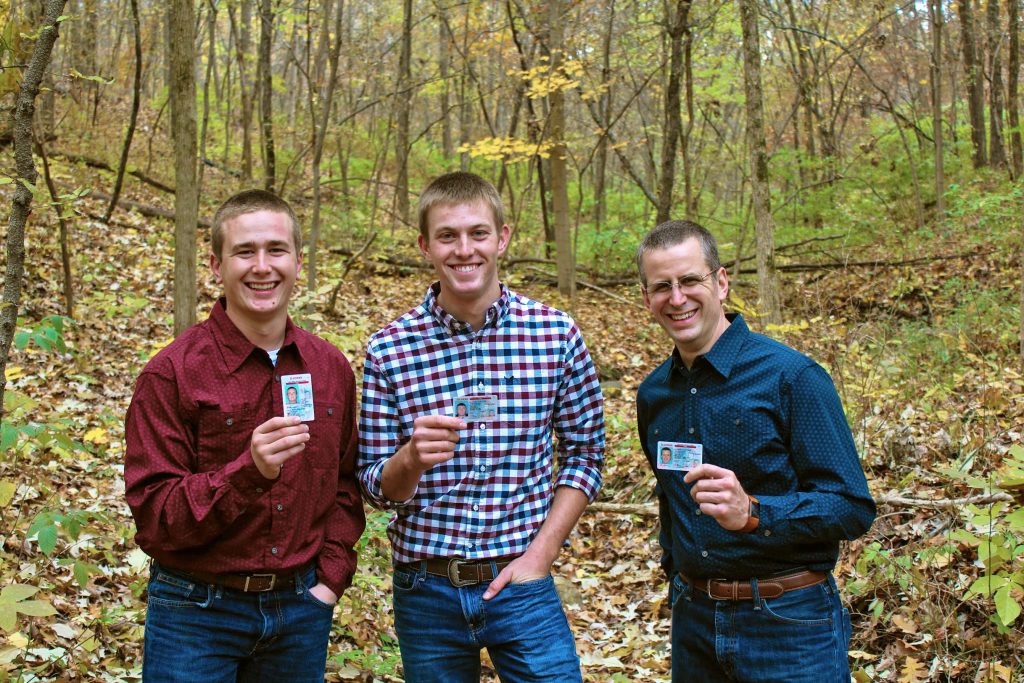 CFO with a CDL

My 18-year-old son Mitch (left) called me one day and asked if it was okay if he and Sawyer (middle), my son-in-law, got their CDL’s.

Well, Mitch got me thinking. My dad drove a truck for many years, three of my older brothers have CDL’s, and I have worked for Nussbaum for over 20 years. So, I told the boys if they were getting their CDL’s, I was doing it with them.

We all passed the written test pretty quickly, although I will confess I did not get a perfect score. Not even close!

But, soon after that, I received an e-mail that we had six drivers, Chad Swigert, Cody Potts, AJ Edgington, Jon Rust, Jeff Jackson, and Eric Hallett, coming off the road for a week to go through their annual train-the-trainer certification.

I thought, “This could be very helpful,” and asked Jeremy Stickling and Cory Adams if they needed another student to train that week. After checking with Dave Keim at Heartland Community College, they said they could definitely use me.

My sons and I didn’t want the automatic restriction on our license, so we were planning to take the driving test in a 13-speed, Peterbilt day cab. As a result, it was decided that I would drive Heartland College’s 10-speed Volvo for the training and the two Heartland students would drive Nussbaum trucks.

The trainers taught me a lot, and I scared them a few times too.

Chad is a great teacher, but it took me a bit to shift well enough to leave the parking lot. After a few struggle-filled minutes, we got out on the road.

Cody tried not to be too obvious as he braced himself against the dash when we neared an intersection.

And I will use this article as another opportunity to apologize to Eric for throwing him against the dash in downtown Bloomington. He was very relaxed… until that point. I should have kept going through that yellow light.

Jeff was calm and gentle as could be despite my lack of experience.

And AJ was very persistent in making sure I cleared every intersection with my vision, but it took me a bit to get used to looking around the mirrors. I understand why the mirror eye concept was appealing to so many drivers.

I was very impressed by all six of the professional drivers that helped train me.

Do You See That Up Ahead?

I’ve helped four of my children obtain their driver’s license and am in the process of helping the fifth. When I’m driving, I’m so much more aware of my surroundings than a 15-year-old.

But I’m amazed at how far ahead all of you are looking, and how you automatically start to process what could happen and how you will react to it.

A number of times one of the trainers would say, “Do you see that up ahead?” It could have been someone pulled over on the side of the road or a piece of debris.

Also, the patience a professional driver exercises each day with passenger vehicles was eye-opening. The American public would all drive differently if they spent a few days with any of you.

Cory took me out for some short trips a time or two. He’s an excellent teacher as well. I heard some comments from him such as, “What should you have done differently there?” And “Why don’t we find a spot to turn around and try that corner again.”

The Moment of Truth

I learned to parallel park and do the offset backing (although a number of you told me that those are not very real-world), and the pre-trip inspection took me a while to learn.
But when I climbed into the cab with the Springfield DMV employee, I felt confident. She sat in the passenger seat and told me to pretend she knew nothing more than the light switch on the dash.

She wanted me to tell her what I would do before I left the lot. I went through everything I knew, and when I got done she cocked her head, looking at me and said, “Are you done?”

I could tell by the look on her face I had clearly missed something, so I went through it all again, from seat belts to items rolling on the floor, checking the windshield, etc. Finally, she looked at me and said, “Does this thing have a horn?”

Are you kidding me? Since I was two, I’ve known that big trucks have a horn. I gave a good pull on the cable and proved to her it did.

My son was standing 50 feet away when I blew the air horn, but he still hopped in the cab a few minutes later for his pre-trip and failed to show her the horn as well. I suppose the apple didn’t fall too far from the tree.

When I got home from Springfield, I told my wife that my son-in-law and I yelled at each other for an hour on the way home.

We were happy as could be that we had passed and received our CDL’s, but it was a hot afternoon when we brought that 1990 Pete day cab back from Springfield. Without any air conditioning, we had the windows down, and the engine was screaming as we came up I-55. And so conversational yelling ensued.

The Tip of the Iceberg

As I drove home, I thought back to when I received my CPA certification, a supposedly very distinguished credential. I was 21-years-old and thought I was pretty sharp. One of the partners of the CPA firm dropped a shoe box full of income tax info on my desk and asked me to complete a client’s tax return. And I realized I didn’t have a clue! An inexperienced CPA is a lot less valuable than an experienced one.

I realize the same thing with my CDL. I have my CDL, but that doesn’t mean I think I’m a professional truck driver.

I am licensed to drive the truck, but I have never had to find a parking spot in the Northeast, or back in blind-side on a busy street, or use mobile communication, or slide tandems, or block and brace a load, or back into a dock, or find my way to a shipper or consignee that I’ve never been to before.

I have not even touched the tip of the iceberg of the job each of you does, and I respect you for what you do every day. Thanks so much!